Map and Reduce are 2 very useful methods available in Javascript Arrays, Ruby Enumerable and Java Stream. With these 2 methods, arrays can be transformed and manipulated in many different ways to achieve a desired outcome.

The methods themselves are known by various names in different languages.

These methods take in a function that will be applied to individual elements of the array, enumerable or stream (or list, for simplicity sake). They’d return a new object with the resulting transformation without mutating the original object.

Map is rather straight forward. It creates a new list by transforming each element of the original list using the given function.

In this illustration, the list is transformed using a function that multiples its input by 2. 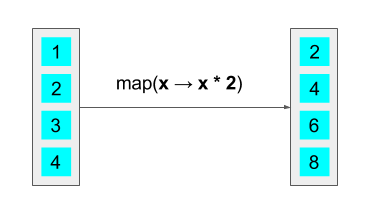 In this example, a list is reduced using a function that sums 2 elements. The result is the sum of all the elements of the original list.

Reduce also accepts another parameter which would act as the starting value prior to applying the function to the elements.

A quick guide to stubbing dependencies in Go

React on Rails with Webpack

A short guide to creating a React application in a Rails project. Uses webpack with Babel to transpile and bundle the application.

A quick overview and sample codes on how I used Ansible to deploy a Rails application to AWS.